Praise for My Country ‘Tis of Thee 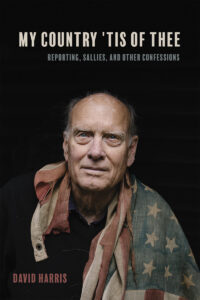 “David Harris writes like Hemingway would have wanted to—hard, no tricks, pungent, but without Papa’s shoehorning his judgments on everyone’s courage and manhood into his characters’ mouths. This collection of fine pieces perfectly embodies his high moral purpose without lecture or cant. Don’t miss a word he writes.”

“David Harris’s new collection is a rich buffet of American life in the last few decades, with a tasty array of side dishes from other parts of the world. His curiosity is omnivorous, his sense of humor and irony constant, and his sympathies always with the outliers and the dispossessed. He has no illusions and no pretense to objectivity. I wish we had more journalists like him.”

—ADAM HOCHSCHILD, author of Rebel Cinderella: From Rags to Riches to Radical, the Epic Journey of Rose Pastor Stokes

“David Harris raises a passionate voice and takes a hard look at justice and injustice in the promised land, his America. He is a writer and a crusader in a grand tradition. I am proud that he got his start at Rolling Stone, where he learned his chops and earned his stripes. His stories, and his own journey, are essential stories of our times.”

“A powerful, deeply moving portrait of a generation, beautifully written and filled with wisdom and love for his country, David Harris’s My Country ’Tis of Thee should be read by every American.”

—RON KOVIC, author of Born on the Fourth of July

“David Harris is renowned and honored for his courage and his deep conviction for doing the right thing, no matter the consequences. But that is not only what makes this reporter’s memoir so special. Harris is a writer of sheer beauty, often elegiac; someone whose intelligence is matched by the grace of his prose. He is engaged and engaging, intimate and unpretentious. You will be at ease with the book, as he is with himself.”

“Can you be charming and hard hitting at the same time? Well, after reading David Harris’s new book, I’d say definitely yes. And I’d add to the list empathy, sensual intelligence, and an apparently fearless habit of telling the truth.”

Theme by Anders Noren — Up ↑